Gerald Rice is a bit of a guru in terms of publishing a variety of works, including novellas, short stories, and full-length novels. He tends to stick to horror/paranormal and is wise in not keeping all of his written eggs in one lotion basket, as can be seen in his author résumé:  Anything but Zombies (Atria Books), Vamp-Hire (Permuted Press), and The Ghost Toucher (Severed Press), to name a few.

Did the voices in my head mention he’s also a publisher?

Gerald’s also working on a Santa vs. Zombies novel, and welcomes input from readers as to a possible title. Get a hold of him on Twitter, shout out your proposed title, and then set your beady little eyes on this gem of an interview.

JO: How do you celebrate Halloween?

GR: The last few years I’ve been taking my daughter trick-or-treating through our subdivision. Apart from that, hiding. Sometimes those children aren’t children…

What word or phrase sends chills down your spine?

I know some words like ‘moist’ really get under people’s skin, or nails across a chalkboard, but for me, it’s pouring. After a zillion beer and soda pop commercials, the overly auditorially-detailed sound of liquid pouring from a can or a bottle (particularly preceded by the pop of a cap or a tab) sets my teeth on edge. Sometimes I have to walk away from someone who’s pouring something because I’m just that sensitive to it at times.

Kind of like in your novel, VAMP-HIRE, vampires have taken over the world and they sure as fuck don’t sparkle in daylight. Your neighbors know a guy who knows a guy who knows of a safe haven. You opt to run with them. What three things do you pack into your duffel bag first, and why?

Food and water. Ideally, my stake or any other melee weapon is going to remain in my hands or get slung over my shoulder. But what kind of food? I hate sandwiches, pretty much any bread or bread products (except for that brown loaf thingy you get at Outback—those are so good!) Hell, let’s be honest, I’m probably not going to last long. Just chuck that thing full of Twinkies and let’s get.

Have you ever witnessed any paranormal activity? If so, what was it, and how did you handle it? If not, would you be enthralled or run away if you did?

The closest I’ve personally come to paranormal activity was this thing standing at the foot of my bed when I was little. I woke up in the middle of the night to a dwarf-sized, cloaked creature standing there, head bowed, not moving at all. I was so scared I just pulled the covers up over my face until I went back to sleep.

What really scares the living shit out of you?

My brain. I know there aren’t deformed, alien creatures lurking in the kitchen when I’m about to go upstairs. But I always imagine something is going to grab me by the ankle between the rails as I go up to bed. I live next to a cemetery, but I suppose familiarity breeds blah. I couldn’t go in the backyard after dark for the first few months, now I hardly think twice about it.

We’ll get to writing/publishing in just a sec. First, I have to know: Do you play Cards Against Humanity? If so, what’s one of your most favorite answer cards? (If not, you’re dead to me. Dead.)

I would play it, but I’ve never heard of it. Is that like a Dungeons and Dragons kind of thing?
*NOTE: Gerald has since been informed of CAH.

Why do you write? Where do you draw your inspiration from?

I rarely set out with the intention of coming up with a new idea. I let my mind wander. Sometimes, that’s in the form of me talking aloud to myself, maybe even about a book I read or a show I watched, and I’ll hit a turn of phrase or leap onto an idea, or have the germ of a thought spring up and with a little cultivating I’m developing a new story. I thought of the entire storyline for my novella Fleshbags after the title popped in my head for no reason at all. It took me something like seven minutes to plot the whole thing.

Do you tend to break the writing rules, or follow them? Why?

I follow them until I break them. I do believe you have to at least know the rules before you go against the grain. It just comes off wrong or uneducated when someone unknowingly skirts them.

Do you follow publishing trends or just write your own shit? Why?

I try to keep an eye on publishing trends, but that’s so I’m not writing something too close to anything else that’s out there. I think it is important to be responsive to what the public wants, but sometimes you really do just have to write down the stuff that keeps the sticky black and yellow goo from pouring out of your eyes and ears.

Do you use classic horror tropes in your writing, such as typical settings and monster weaknesses/strengths? Why or why not?

I’ve written a ton of zombie stuff—not so much vampires and no werewolves. If I write a story with a regular old zombie then I’ll do something different, like with The Butterman Cometh. The main monster was a guy that looked like Bibendum but he was made from butter. His weakness was kind of obvious, though—fire.

In addition to writing, you also run Razorline Press, which specializes in indie horror. So you write, edit, speak, publish—How do you juggle all your different responsibilities without going completely insane?

I balance by only doing one or two at a time. With my new site coming (geraldrice.com), I’ll be doing a big push on all fronts. I have three speaking engagements this year, a new book I’ll be publishing and I’ll be shopping for an agent with a new manuscript.

If you could do it all over again, would you still pursue a writing/publishing career?

Absolutely! Maybe I’d do a lot more reading, we could all be a little more well-read, but I can’t imagine not writing and it’s the only thing I can see doing for the rest of my life.

Let’s wrap this up with the most important question of the night: Are you going to demand I take this interview down and Unfriend you on Facebook like all other interviewees do?

No. So long as you pay me in those ‘Icelandic pelts’ as we agreed.

Take a trip into Gerald’s world by visiting his site. And don’t forget to look up his work and snag a copy today! 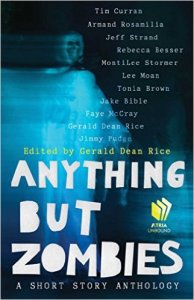 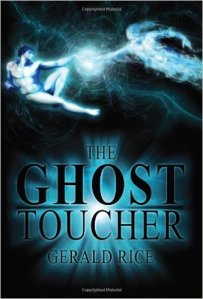