Click on images to scope out the book details/Table of Contents and snag your copy!

Learn the fate of a cheating man in “Dying Wish.”

In “Layer”, a man named Early indulges a night filled with alcohol, drugs, and sex in the hopes of claiming another prize for his trophy room.

In an epic judged showdown between US and UK horror writers, discover why my story, “Familiar Scents”, took home multiple accolades, including Best in the US!

Ever heard that old urban legend about people hiding under your car with a knife in hand? Check out what happens in “Severed Attachments” before you discount it as nothing more than myth! 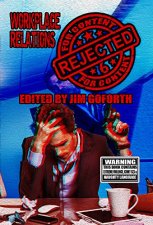 Find out what happens when a delivery driver has had enough of the fucking cheapskates of the world in “Just a Tip.”

The second year of the epic US vs UK horror writers showdown. Will my short story “Plumb Fucked Island” have what it takes to defeat my UK foe? Snag a copy to find out! You can also vote for your favorites at www.shadowworkpublishing.com!

The authors in this book want you to grab your binkie and blankie, ya fuckin’ snowflake. It’s time to get Triggered.

Find out what could trigger an indie author in my horror offering titled “Bad Literature.”

Michayla and her younger brother embark on a ride that blurs the line between reality and perception. What’s real? What’s fake? Are the true terrors of the world around us or imagined? Find out in “Horrorcoaster”, my latest published piece from the excellent folk at Left Hand Publishers.

Not one, but two stories of mine are included in this anthology.

Story 1: “Severed Attachments”, a reprint about an urban legend certain to leave you shivering.

Story 2: “Uncaged” is a brand new psychological horror short that tells the tale of how deep family bonds can be.

“Saturday Morning Cartoons”, my shortest published story to date, tells a creepy tale of how a child’s imagination can be forever tainted by watching too many cartoons.

An anthology of automotive horror featuring Stephen King’s “Trucks”, which inspired the movie Maximum Overdrive, plus me, Guy N. Smith, and many more great writers who want to rev your engines and lube your pistons.

In my story “The Cavalier Cavalier”, new underground streetracer Caprice finds herself – and her one-of-a-kind Cavalier – at the mercy of a vengeful opponent.