This year, there were a few great subs for the 2015 Spooky Short Story Contest. Here’s a quick summary and review of the 2nd place winner’s work, “The Man Who Played With Dolls.” And no worries: You’ll get a lot more comfortable around Shawn tomorrow during his Halloween night interview.

“The Man Who Played With Dolls” by Shawn Milazzo

“The Man Who Played With Dolls” portrays a sick, delusional man who kidnaps little girls, kills them, rips out their innards, and uses the human husks as various everyday items, such as lunch boxes. He mostly inserts music boxes into their backs to create musical dolls. He also happens to own a toy store, but his special dolls are kept in his secret room, away from customers’ wandering eyes.

This was also written in a somewhat experimental structure, as it switched from first to second to third person narrative throughout, depending on the schizophrenic main character’s dominant personality at the time. There were also pages of what might have been journal entries scattered throughout, illuminating the character’s demented mind in multiple text fashions. Definitely a creepy story. 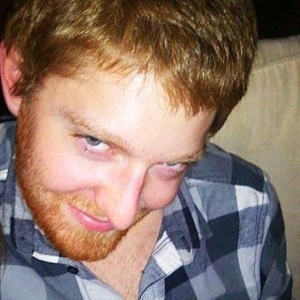 Shawn Milazzo has lived long enough to know that anyone is capable of anything. He is a Horror Writer Association Member and has a few works on amazon.com. with such titles as “The Funeral Hobby”, “Sex Beast Warrior”, and “Rain of the Gods”.  His bizarro story, “The Scumfucs Tour to Toyland”, was recently selected to be in Blood For You: A Literary Tribute to GG Allin. He swears he’s still working on Pounded by Pod People, a horror-erotica novella.

When Shawn was younger, every year he used to pray to the Gods of Halloween to become a vampire. It never worked, or did it?

You can catch an interview and learn more—maybe too much more—about Shawn tomorrow night, before the grand finale!